It is a tragedy for the City that the Futurist was allowed to get into its current condition. We as a group were campaigning to save the building long before other groups began to show an interest.  Having looked at the evidence it became apparent that years of neglect have led to a situation where the building cannot be salvaged. Sadly this view was reinforced when members of the group were allowed into the building by the Council to see the extent of the damage.

However, our campaign did succeed in getting the developer to completely revise its design and produce a scheme that we consider celebrates the Futurist and Lime Street’s long association with Cinema. We have also been allowed into the ABC to view the building and see the plans for its restoration. The auditoria of the building is stunning and, if delivered, the proposals to convert it into a venue and TV studio will ensure  that something good has come out of this process. It would be counterproductive if the ongoing campaign to stop the Lime Street development stopped the ABC refurbishment. The following images were taken by Chris Iles from Williamson Tunnels, but due to the Structural nature of the existing building, there where areas that we could not access due to safety reasons. 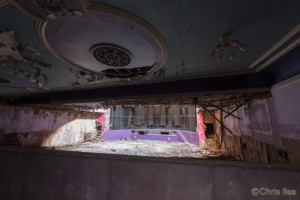 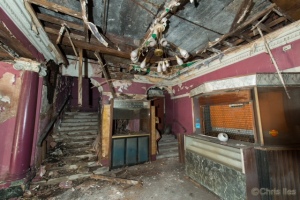 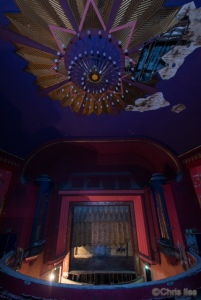 An artist’s impression of the restored Futurist by (c)CreativeRendition.co.uk & ShareThe City.org

Liverpool Mayor Joe Anderson fumed this week against the disgraceful state of Lime Street, announcing his ambitious vision for a 5* Adelphi Hotel, but also stunning readers with plans to seal the fate of the beloved Futurist cinema, allowing its demolition by Neptune developments.
Horrified campaigners today urged the Mayor to keep an open mind over the Futurist and invited him to explore creative ideas for retaining the magnificent Edwardian movie theatre within his vision for a revived Lime Street gateway.
Futurist campaign leader Lesley Mullally, who works as cabin crew for Easy Jet at John Lennon Airport, launched the ‘Save the Futurist’ campaign in September 2012, and quickly raised over 1600 signatures on a petition to save the façade. In 2013 she presented the names to a standing ovation from the full council at Liverpool Town Hall.
Mayor Anderson promised at the time he would do everything he could to retain the Futurist frontage, and since then Lesley says the campaign has been inundated with support from Liverpudlians worldwide, including the city’s creative and business community.
“We’ve had an amazing response from Liverpool people, especially creative businesses, who have given their time for free to come up with alternatives to demolition. We’ve had incredible contributions from architects, artists, urban designers, engineers and digital media firms who believe the front of this building can still be saved – and must be saved!”
Lesley hopes the Mayor will keep his door open to such grass roots ideas and has now written asking him to broker an urgent meeting with the developers Neptune.
First opening its doors in September 1912, the Futurist has stood firm through upheavals in the city and society, surviving two world wars, countless recessions – and even the ruthless 1960s highways planners.
During the war the cinema kept the Liverpool public up to date with the latest news on the war effort, and suffered severe bomb damage during the Blitz. Because of its important role in maintaining morale, the Futurist was rebuilt and reopened within a month.
Up until closure in 1982 the Futurist was considered to be one of the most luxurious cinemas on the circuit, originally housing a full orchestra to accompany silent films and a prestigious first floor café, with a foyer lined with Sicilian marble. It was the first in the city to show wide screen ‘cinemascope’ movies.
With Liverpool Council as freeholder, the building has lain empty for over thirty years, and allowed to deteriorate as plans for redevelopment of this key city gateway have come and gone. The campaigners and their thousands of supporters believe the Futurist remains an iconic part of the history and heritage, and have tabled an alternative vision created by local planning and digital media specialists.
Jonathan Brown, who runs urban design and planning consultancy Share the City, said:
“Modern cities are in fierce competition to attract talent and investment. Stylish historic architecture like the Futurist helps Liverpool stand out from the crowd – caring about it asserts the city as smart, successful and confident of our place in the world.
The Futurist is one of those magical buildings that connects us all to our shared past, adding elegance and glamour to one of Liverpool’s most famous streets. Like the Albert Dock, Ropewalks or the Baltic Triangle, all of which were once derelict and in danger of demolition, with investment and imagination it can house new uses in a fantastic reminder our colourful past.”
Spencer Kelly, Senior Lecturer, Architectural Technology at LJMU states:
“The Futurist cinema’s distinctive façade expresses the spirit of the age. It adds character to Lime Street, one of the true ‘Great Streets’ that brings together Liverpool’ greatest architectural, cultural and infrastructural assets. With more transparency from developers and constructive engagement with the creative community we can ensure the Futurist isn’t lost forever.”
Campaign member Sue Gilmore, said:
“The Futurist may not be listed by the government, but to the people of Liverpool it’s already classed as a building of historic interest. If it’s demolished by the council what will go back – another monstrosity like the student flats on Copperas Hill?”
“We must ask the question – what went wrong with Lime Street and the Futurist to allow it to fall into such a sorry state?”
Hollywood director Alex Cox has given his support to the Futurist campaign, having filmed there during the European Capital of Culture year in 2008. Liverpool Artist Paul Rooney has also used the theatre as a location, and is angry about its potential loss:
“The statement from the Mayor about wanting to knock the Futurist building down is absolutely shocking.
Yes the restoration of the facade will cost money, but it seems that there has been little attempt to actively find private sector or other funding to cover this.
Cities with some respect for their heritage and some sense of civic pride have to save buildings of the calibre of The Futurist, and there would be no argument about it in any other major city in the world.
I thought we have moved on from the old post-war days when any building could be demolished in Liverpool simply to ease cheap development.”
Historian and author Rex Stevens, who runs website Liverpool 1207, says:
“Once we lose such treasures you can guarantee people will spend many years regretting their demise.”
Re-launching her campaign petition (thefuturistcinema.wordpress.com), Lesley says while the building stands there is still hope, and remains optimistic the Mayor will uphold his promise to explore every option.
“We’re confident that if Joe Anderson and Neptune Developments will meet with us, they will want to keep the front of this magical old movie theatre at the heart of their new vision for Lime Street. The Futurist has the potential to be one of the most beautiful façades on Lime Street, and we believe restoring it compliments rather than conflicts with Joe’s regeneration plans”.
ENDS, 982 Words.

Notes for Editors
Originally called the Picture House, and opened in September 1912the Futurist started life during the affluent Edwardian era as central Liverpool’ first purpose-built movie theatre. With a striking Art-Nouveau façade and plush French Renaissance interior the cinema was described as ‘the finest in the Kingdom’.
The architects were famed Leeds theatre designers Chadwick and Watson, who designed landmark buildings across England, notably the listed Alhambra Theatre in Bradford.
CONTACT thefuturistcinema.wordpress.com
lesleymullally@hotmail.co.uk

Today I had a very interesting meeting with one of Liverpool’s leading Architectural practices & planning specialist sharethecity.org
All thanks to the fantastic support & publicity from the Liverpool echo.
Were moving forward on developing our vision to save the facade of the Futurist as part of the new Lime Street gateway .

Us Futurist campaigners have been involved in meetings with Councillor Nick Small & other key councillors from the cabinet office to discuss our #savethefuturist campaign & its role within next years IFB (International Festival of Business) hosted here in our great city in summer 2014.

We are delighted to announce that talks are underway to clean up the Lime Street gateway ahead of this event, showcasing the façade of the Futurist as the main key focal point. That means the weeds, trees and other plants growing out of it will be removed, windows will be fixed and the façade is set to be illuminated!

This couldn’t be better news for our campaign as it goes a long way towards showing Neptune Developments how amazing it can look as well as highlighting the buildings historic significance within Liverpool. Hopefully we can make them see its more in there interest to keep it than destroy it?!

The council have given us the façade of the Futurist to use as a palette & a medium to showcase our ideas, memories etc. of the building and bring it back into forefront of peoples thinking again.

Some of the ideas that have come to mind are show reels being projected onto the buildings opposite, relevant art work & photography showing the buildings history, films that were shown there etc. etc.

Stand by for regular updates from now on…. things are getting exciting!

I would just like to say a big Thankyou for what you have written about this fab building, it’s very moving, I especially like her ‘fluttering eyelashes!’
Once again here’s to saving the futurist.

I am very proud to announce that we have over 1100 signatures on our petition now!
We will be presenting this to Liverpool City council in due course. Again this is to make them aware of how important it is to the people of Liverpool. That we believe the facade should be kept and incorporated into any new plans for the Lime Street regeneration plan.
The petition will stay running however as this is by no means the end if our campaign, if anything it is merely the beginning! We need to keep the momentum up so please keep spreading the word, get people to sign, have a look at the blog and input any details of memories they have.
Today BBC Radio Merseyside contacted me with details of the projectionist who worked at the Futurist from when it got taken over by ABC until its closure! He’s a lovely guy who has film footage of the interior for me! I can’t wait to see it, ill also get it put up onto the blog if I can for everyone to see.
Ill be in touch soon with details of our next meeting, we may have an informal get together tomorrow evening on lark lane but will arrange a proper meeting in the near future giving everyone who wants to attend some decent notice.
Have a good weekend everyone & remember #savethefuturist 😄

Hi everyone, Currently in Susie & Stevie G’s having a #savethefuturist meeting (with wine of course) & Neil Holmes from Liverpool Blitz!
Thank you to everyone who has signed the petition so far, 500+ signatures! If you haven’t already done it here’s the link again: goo.gl/B7hml
We have had an interview & our pictures taken for the Liverpool Echo, so please look out for us in the next couple of days! Also we’re going on BBC Radio Merseyside next week. Ill keep you updated with exact dates and times where possible.
Tonight we’re designing posters to keep the momentum going. All ideas welcome, just contact us on twitter or facebook (lesley@thefuturist)

Have a merry christmas everyone & remember #savethefuturist – keep spreading the word!!!

Hi everyone I am pleased to announce the 1st meeting for #savethefuturist. Everyone is welcome, informal setting at The Lodge, Lark Lane this Sunday at 16:00hrs.

Everybody with an interest welcome.